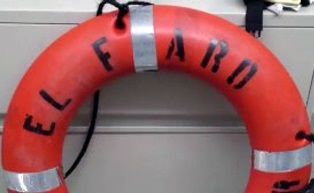 As was widely reported, the Coast Guard has suspended its rescue mission for the crew of the 40- year-old El Faro which sank off the coast of the Bahamas during Hurricane Joaquin. Since this incident made international news, stories are being shared about life aboard the ill-fated cargo ship. CNN reported that Kurt Bruer, a former quartermaster with six months of experience aboard the El Faro, stated that the ship had holes in its deck. Marvin Hearman who sailed on the ship as late as last August said there was rust everywhere. Hearman also revealed to CNN that the areas of the vessel such as the chief cook’s room leaked water and that the ship has issues with drainage. Chris Cash, another former crew member, told CNN that the ship’s owner Tote Services just bandaged the ship rather that preforming a proper repair. Tote disputes these claims and states the ship was properly maintained.

If the ship indeed was prone to leaking and Tote did not make the proper repairs, the company could be held liable for the crew’s death under maritime law. Ship owners are obligated under the law to provide their crew with a ship that is reasonably fit for its intended purpose. If the ship owner fails to meet this burden, a judge or jury could find the ship unseaworthy. If an unseaworthy condition played any part in the El Faro’s sinking, Tote would likely be found liable for the deaths and be required to pay compensation to the families of the lost crew members.

It is too early to draw any conclusions as to what caused the El Faro to sink. Our thoughts and prayers are with the families of the lost crew members. We will continue to follow this case and report.